We all know what the Caribbean is about. Tropical paradise, unspoilt beaches, Carnival celebrations and Rum.

The best Caribbean island is Tobago because the Fountain of Youth is located at the Nylon Pool, the oldest protected rainforest in the western hemisphere filled with exotic birds and some of best diving and snorkeling sites in the world.

Where is the Fountain of Youth?

Juan Ponce de Leon was a spanish explorer who accompanied Christopher Columbus on his second voyage to the Caribbean in 1493.

In 1513 the myth of a magical pool of water that restores your youth and sexual vitality drove Ponce de Leon mad. He petitioned the crown to search for Fable land called “Bimini”.

The “Myth” was a Tale from the indigenous tribe of the Arawaks.

The Arawaks who began migrating across the caribbean around 500 BCE from the Orinoco river.

The South of the Caribbean.

Peter Martyr d’Anghiera(the writer) wrote that Juan Díaz de Solís(The Navigator) did not believe the Fountain of Youth was in the Bahamas or Florida but South in the Yucatan peninsula.

The closest they came to finding the Fountain of Youth was in Bahamas when the local indigenous people who were identified only by the canoes they used to go across islands pointed them in a direction that they could not understand.

Ponce de Leon landed on Florida with at least 200 men.

The men tasted every stream, river, lake, pond and ravine that was in Florida.

The Fountain of Youth was never in Florida.

Christopher Columbus found Tobago in 1498 and named her “Bella Forma” because it was the most beautiful island he ever saw.

He then ventured through the ‘Boca de la serpiente’ or the Columbus Channel as it is now called where he landed on ‘El Gallo’ which means “The Cock”.

A tiny island off the coast of Trinidad and Venezuela

There he encounter Indigenous people who used Canoes to move from island to island.

Christopher Columbus never told Ponce de Leon of his discoveries. His son Diego and Ponce were in Conflict over Puerto Rico.

Columbus never once mentioned a mythical pool of everlasting life to anyone. He talked about how easy it was to trade colorful feathers and ornaments for gold and jewels.

The Fountain of Youth is Nylon Pool, Tobago

To the locals, the bay is known as “No Man’s Land” and was thought to be its own little island by the spanish explorers.

Situated between the Bon Accord lagoon and the Buccoo Reef. Directly infront of No Man’s Land lies a 7km 5 reef flats ecosystem.

In the middle of the reef surrounded by 30 meters deep water you will find a meter deep Coral pool with the most magical water on earth.

The coral dust looks like white sand but it’s the best skin exfoliator on earth. Your skin will feel 10 years younger because of the natural minerals of the coral.

Local legend has it that males swimming in the Nylon Pool has “Youth Stamina”.

Tobago has some of the most kids friendly beaches in the Caribbean because of the coral reefs.

Pigeon Point beach and Store Bay waters are usually calm with no under water currents present.

Tobago has the oldest protected rainforest in the western hemisphere with suitable trails and hikes for kids to see wild animals, birds and nature.

The best Caribbean island to visit for adventure

Tobago has the oldest protected rainforest in the western hemisphere dating back to 1764. For hundreds of years the European explorers cherished this unique land.

Hiking in the wilderness, exploring untouched rainforest and witnessing animals in their natural habitat does not come to mind when vacationing in the Caribbean but it is the perfect compliment to the perfect vacation.

Tobago was part of South America millions of years ago and because of this the Flora is different than other Caribbean island.

Inside this rainforest you’ll find the Argyle Waterfalls.

The hike is a clearly marked trail and takes around 20 minutes to reach. It is easily accessible and all ages can partake.

You will find birds, butterflies and mammals on your journey.

The enthralling ambience of nature and the smell of lush vegetation will release all endorphins your brain can produce.

As your inch closer to the waterfall you can hear the relaxing sound of water crashing down 3 mesmerizing pools of crisp, clean mountain water.

If you are brave enough you can hike all the way to the top where you are blessed with your  own private pool carved out in rock.

Local Folklore has it that Gang gang Sarah was a West African Witch who flew across from Africa to Tobago in 1793 to take care of her people who was brought as slaves.

In 1833 when slavery was ending and she was sure her people was safe Gang gang Sarah climbed this Ancient Silk Cotton tree and attempted to take flight back to Africa.

She fell to her death.

Local Voodoo witches claim she lost some of her power because she consumed salt.

The tree is said to grant wishes or curse you according to how much respect it is paid.

Are you a Pirate of the Caribbean or a Conquistador in the Spanish fleet?

Are you a Englishman in the Royal Navy or a kidnapped damsel marooned on a secret beach?

The best caribbean beaches are the ones that cannot be easily found and that were used by Pirates, Spaniards or Englishmen.

This Secluded beach is 20 minutes walk and down 176 steps from Charlotteville.

The water is perfect for snorkeling. A wide variety of Fishes, turtles and coral can be seen even by the half blind. It’s that clear!

Pirates bay was a Popular hideout for BlackBeard back in the 17th century after he raided the Spanish fleet for gold and treasures.

Pirate Captain John Fenn was ambushed by the Royal Navy’s warship HMS Winchelsea(1721). He careened his ship into one of the bays and escaped on foot only to be caught in the forest a day later.

Undoubtedly the best kept secret of the Island.

A 2 minute walk through the edge of the forest you will meet a course sand beach with a green tint of water.

It’s a treasure for snorkeling and scuba diving. The water can be a little rough but it is not known to have strong currents.

The beach is secluded and only visitors seeking this reward can found.

Perfect for couples who wants a beach alone.

Witness the bay where one of the fiercest pirate battle of all time took place. The bay was said to turn crimson with the blood of pirates as the Morgans, Fenns and kids battled for leadership of the Caribbean.

Snorkel the bay or search the bay for treasure. Dead man’s Cove awaits you.

Enjoy a romantic walk on the beach as the sun eclipses the horizon into the ocean.

Many have come to the island and few has left because they fell in love all over again under the Mt. Irvine Sunset.

I guess it’s because we are so close to the Equator. The Earth has a belly which causes the horizon to stretch.

You may accidentally be treasure hunting in the Ocean and you have no clue!

I’m sure you have already heard the stories about of #1 best diving spot in the world.

Speyside is home to the largest Brain Coral in the world and offers 30 dive sites with the one of the world’s best dive site “The London Bridge”.

The Guyana Current sweeps past the rocky outcrops of the seabed, it creates spectacular drift-diving areas, particularly at the ends of the island.

“Turtles did not seem to be affected by the current at all, they just slowly and steadily kept on doing their own thing as we flew by.” stated  Marlies Wolters
Founder of Dive o’clock.

As a general guide, the Atlantic coast of Tobago features well-developed lush sloping reefs, whereas the Caribbean coast is primarily composed of rocky formations with encrusted sponge and coral growth.

Giant barrel, vase and rope sponges attract Angelfish and make the reefs a rich variety of texture and colour. The features of the underwater landscape vary enormously.

Are you done swimming yet?

Sunday school has no religious significance and is very ironic in naming because of wild sensual nature of the party.

Tourist and locals meet on Sunday evening at Buccoo for a night of drinking rum and dancing to music of all kinds.

This weekly celebration is held since the days of the abolishment of slavery in the 1800’s.

Enjoy one of the best Caribbean island party for free.

The best Caribbean island for food

The food is amazing!!!

The Caribbean style BBQ is quite different with more species and herbs.

Tobago’s cuisine is a unique blend of African, Indian and European recipes aged to perfection.

Curry Crab and Dumpling is a local speciality. Curry shrimp.

The local twist leaves your mouth watering for more.

Tobago is a very cheap caribbean island to visit because of the economic stability of the nation for many years.

The average taxi fare around the island is $3-20 USD per person.

The best Caribbean island for Couples

One kiss under the fabled waters of the Nylon Pool brings couples everlasting love.

A private beach for the two you of alone.

Drinking and partying for those who seek excitement.

Women have been known to cage thier husband and never leave this island.

Both Tobago men and women are fun and loving. The island loves to relax and enjoy life.

At the parties and tours, in the city and the streets, the people are amazing to meet and will welcome you with arms wide open. 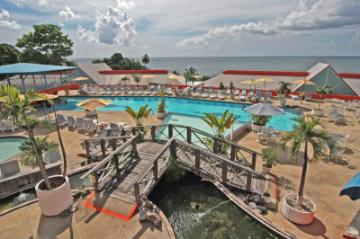 What is the best Caribbean Island for girls’ getaway?

The best Caribbean island for girls’ getaway is Tobago because the men are kind and courageous. The island is known to treat women with respect since the 1800’s. Tobago also features secret beaches and adventure.

Where is the best snorkeling in the Caribbean?

The best snorkeling in the Caribbean is undoubtedly Tobago. This lower Caribbean island was home to many pirates that used its shallow bays as hideouts. The island has coral reefs all around it and the world-famous Buccoo Reef.

When is the best time to visit Caribbean Islands?

The Best time to visit Caribbean islands is between January and June because of the Wet and Dry season. January is the beginning of the Dry season which brings clearer waters. This is the perfect time for you in the winter. Blizzard and all.

Where are the best Caribbean beaches?

The best Caribbean beaches can be found in Jamaica, Cayman Islands, Tobago, Barbadoes and St. Vincent. In this article, we examine the magical waters of Tobago.

What is the best Caribbean island to visit?

According to who you ask or what review you read there will always be good and bad about what is the best Caribbean island to visit. Your hobbies and likes play a great part in which island you will enjoy the most.

About the author: Sean Dalipsingh
Sean Dalipsingh is the CEO/Founder of Flyers Club. He is a sometimes fictional horror and fantasy writer, sometimes BlockChain developer. He loves adventure travel and is considered to be on the wild side. He believes in philanthropy and saving the world.

What are your thoughts?

Let's explore the world together
Building the largest travel group on the planet!
Join us now, it's free!

Are you sure you want to delete your Profile?

This will remove all of your posts, saved information and delete your account.

This cannot be undone.